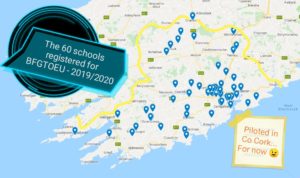 Register your class or school for 2021!

‘Education isn’t the filling of a pail, but the lighting of a fire’ (W.B. Yeats)

BFGTOEU is an exciting and engaging new programme which get you and your students thinking about the role of Ireland in the European Union. It also aims at developing the students’ critical thinking regarding their role in their community, Ireland and the European Union. Very soon students of all ages realise and debate this club they are a citizen of!

BFGTOEU is led by UCC, supported by the European Commission, the Department for Foreign Affairs and Cork City Council. It is a fantastic example of all levels of government, local, national and European, working together to develop active and inquisitive citizenship.

Please register your class or your school for 2021 below.

During the BFGTOEU programme, your students will work on small or big projects from art work, to developing games or videos on the EU using STEM skills or a poster. Once you submit your class or school project by the end of June 2021, you will receive a plaque. Each school plaque is perpetual. Personalised engraved name plates are added to acknowledge the specific achievement of classes and their teachers.

Please fill out the form below for 2021:

“Remember the EU is worth celebrating”

Extracts from an article in the Sunday Times Ireland

“Schuman Day didn’t go entirely unmarked in Ireland. On RTÉ Radio 1’s Drivetime there was a charming item on an EU-themed quiz in Kilmurry national school in Co Cork. Emmanuelle Schon-Quinlivan, a politics lecturer at University College Cork and author of the educational programme “My Big Friendly Guide to the European Union”, was putting the 3rd and 4th year children through their paces.

The EU, reckoned the pupils, is “fun” and “made for peace”. They learnt about stuff such as the single market and how growth hormones were banned from the food chain.

“They need to figure out for themselves and think critically about what it means to be part of the club,” Schon-Quinlivan said. “This is not at all about selling the European Union to the children; it’s getting them to reflect on what are the advantages and disadvantages of being part of a club, about being a smaller member.”

Chances are that the boys and girls of Kilmurry national school are considerably more clued-in than many of their fellow citizens who are eligible to vote in the European elections at the end of this month.   […]

Every time anyone demands to know, Life of Brian-style, “what has the EU ever done for us?”, they should be presented with its equivalent of the Romans’ contribution to sanitation, medicine, education, wine, public order, irrigation, roads, fresh water systems and public health. And, of course, peace.

Then they should be enrolled into a course of “My Big Friendly Guide to the European Union”, whereupon they can give some actual thought to what they like and don’t like about the EU, and what elements of it they want to change or embrace.

Until such a miracle is wrought, the least everyone can do is go and vote on May 24.”

This is an example of the plaque you will receive.

Find out more or adjust your settings.